He took oath in the name of God amid cheers from well-wishers and his supporters, who were also raising slogans of Bharat Mata Ki Jai.

Prime Minister Narendra Modi finally broken his silence on the change of guard in Karnataka. Congratulating new Chief Minister Basavaraj Bommai, he tweeted: “He brings with him rich legislative and administrative experience. I am confident he will build on the exceptional work done by our government in the state. Best wishes for a fruitful tenure.”

He praised former chief minister B. S. Yediyurappa, who resigned on July 26. “No words will ever do justice to the monumental contribution of Shri B. S. Yediyurappa Ji towards our party and for Karnataka’s growth. For decades, he toiled hard, travelled across all parts of Karnataka and struck a chord with people. He is admired for his commitment to social welfare,” the PM tweeted.

Mr. Yediyurappa tweeted back saying: “Thanking him for the kind words.

A good number of Bommai’s supporters, many from his constituency Shiggaon in Haveri district, stood outside Raj Bhavan to cheer for him as he took the oath of office. Shiggaon comes under Dharwad Lok Sabha constituency and is about 365 km from Bengaluru.

Son of former chief minister and Janata parivar leader S.R. Bommai, he was chosen to replace B.S. Yediyurappa at the BJP legislative party meet held in Bengaluru on July 27. Mr. Bommai arrived at the venue along with his family members, including wife Channamma, children Bharat and Aditi. 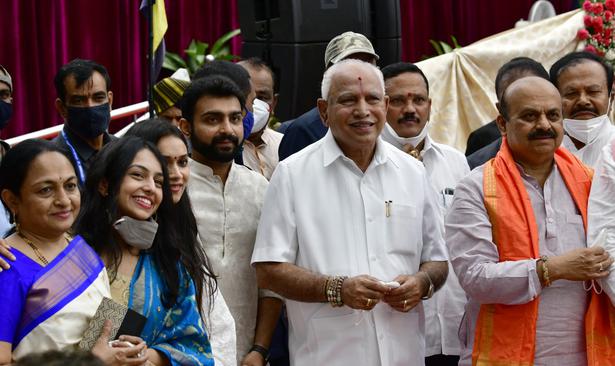 Former chief minister B.S. Yediyurappa with the family members of Basavaraj Bommai (right) who was sworn-in as Chief Minister of Karnataka, at Raj Bhavan in Bengaluru on July 28, 2021.

Outgoing chief minister B.S. Yediyurappa looked cheerful and arrived at the venue early. His younger son B.Y. Vijayendra, whose role in his resignation from the post of chief minister, is a matter of speculation, was also present. Among those present in big numbers were minister’s from the outgoing council, and legislators who are keen to make it to the new cabinet.